The UNC Center for European Studies is proud to maintain a partnership with the Exodus Institute in DC. The Exodus Institute facilitates initiatives that address the forced migration crisis across the world. Our partnership began with the Welcoming Immigrants to America Video Competition in Spring 2019, and subsequent panel on the Value of Immigration in Fall 2019. During Spring 2020, Cameren Lofton (UNC Class of 2020) served as the partnership’s Program Assistant, developing events and communications to connect our local stakeholders with knowledge about forced migration.

Originally from McDonough, Georgia, I graduated from the University of North Carolina at Chapel Hill in May 2020. I studied Political Science and Contemporary European Studies with a minor in German. On campus, I was involved in a student theatre group, the Black Arts Theatre Company. In addition, I was a member of the Working Group on Refugees, Europe, and Service-Learning (WRESL) through the Center for European Studies (CES) and Honors Carolina’s Excel Program. I was also involved in a student-run online magazine, The Bridge, as an editor. Though I have studied many topics throughout my years at UNC, I have a special interest in political behavior and the politics of immigration. Learn more… 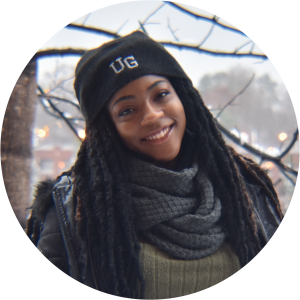 Introducing Cameren Lofton, the Program Assistant for the partnership between the UNC Center for European Studies and the Exodus Institute.

LINC is one UNC student organization making a difference on campus and in the local community.

Immigration in France: Organizational Efforts in the Neighborhood of La Goutte d’Or

This organization offers programs tailored toward children in Paris.

The first in a series of posts focusing on the complex issue of migration that is caused or influenced by climate change.

The Legal Challenges of Climate Migrants

Highlighting some of the complex legal challenges that climate migrants face and how these challenges are being addressed at both national and global levels.

Guatemala: An Observation of Climate Change and Migration to the U.S.

Focusing on the country of Guatemala and how climate change has affected people who live in the rural and agricultural regions of this country.

Sierra Leone: An Observation of Climate Change and Migration to Europe

Highlighting migration from the country of Sierra Leone and how climate change is affecting the country.

Migration Amid a Global Pandemic: How the Coronavirus Has Affected Migration Around the World

How outbreak of the novel coronavirus has impacted migration around the world, including immigration to the United States and refugee camps.

The Fields of Immokalee
Film Screening and Panel

The Value of Immigration to Local Communities:
Mobilization in the Time of Crisis

The spring 2019 Welcoming Immigrants to America video competition yielded several creative student works. Videos were submitted by UNC students, with their best arguments as to why the US should welcome refugees and immigrants. The three winning films and three runners-up were screened at the fall 2020 Value of Immigration panel.

About the Exodus Institute

Based in Washington, D.C., The Exodus Institute was founded in 2017 inspired by the spirit of the Exodus ship. The historic voyage of the Exodus vessel carried Jewish migrants from Europe to the Middle East in 1947, displaced after surviving the Holocaust. Today, more than 65 million people are displaced due to conflict, intolerance, economic disparity, and environmental disasters. These challenges continue to increase, driving forced migration and creating one of the greatest humanitarian crises of the century. As drivers of migration escalate, so too does negative sentiment.

A key component of the Exodus Institute’s mission is to mobilize the private and international sectors to address the forced migration crisis. We aim to create a public awareness campaign, whereby we present the nation’s willingness and continued ability to absorb immigration as both necessary to and consistent with our democratic values. History has shown that immigration is our tradition; and it has defined and refined our democracy. Through an understanding of the economic, political, and social drivers of immigration in the past, we can create an understanding of how immigration today is a continuation of this long history.