Now on Friday 2/7: The Fields of Immokalee: Screening, Discussion, and Reception 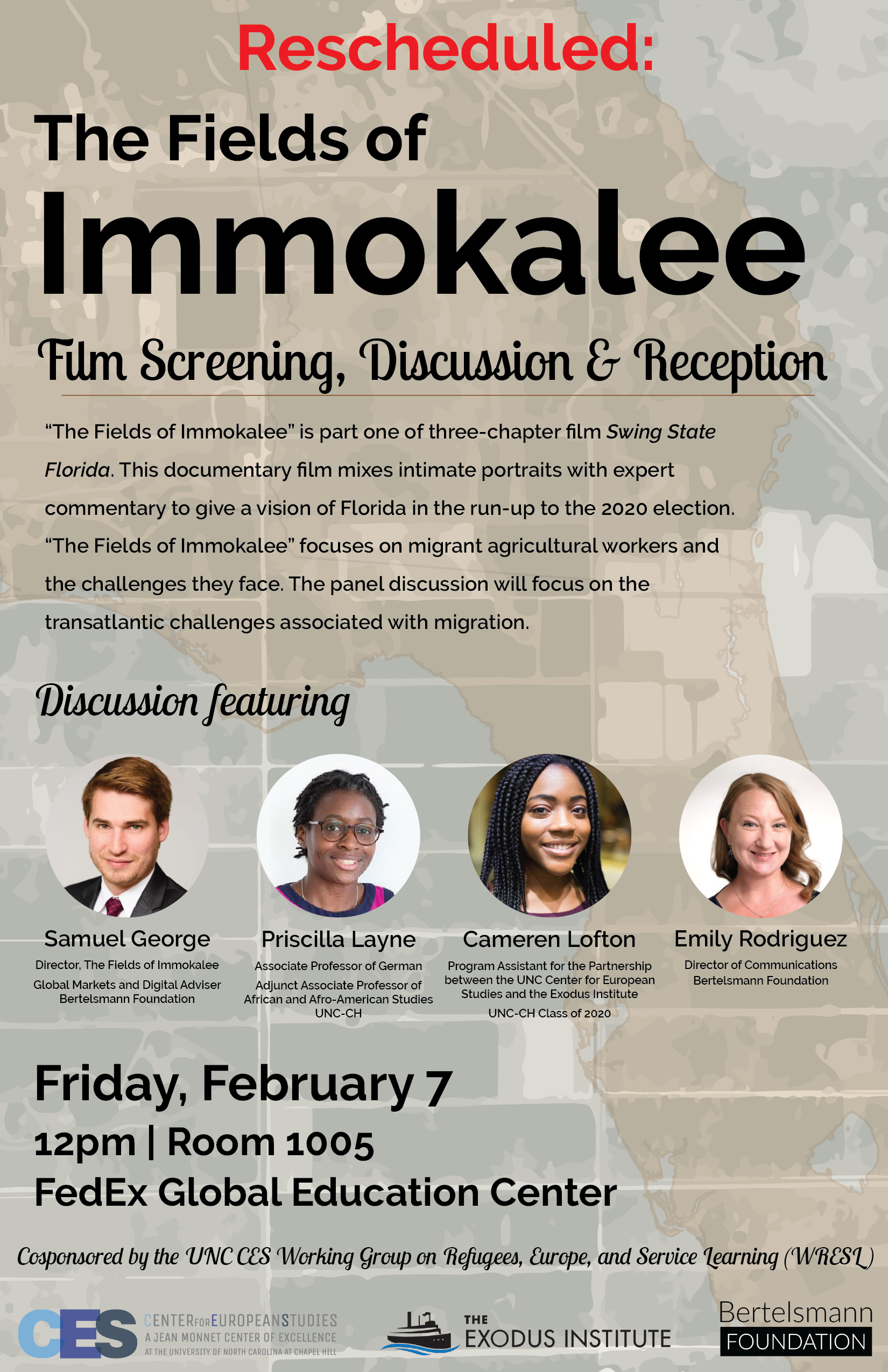 “The Fields of Immokalee” is part one of three-chapter film Swing State Florida, directed by the Bertelsmann Foundation’s Samuel George. The documentary film mixes intimate portraits with expert commentary to give a vision of Florida in the run-up to the 2020 election. The challenges documented in the film present struggles replicated in swing states across the country. Swing State Florida takes the viewer on a journey through three critical Florida communities: migrant agricultural workers in Immokalee, the historically African-American Liberty City area of Miami, and the Hurricane-stricken panhandle. In each place, we hear from people facing challenges from climate change and migration, to political and economic marginalization.

This screening will focus on “The Fields of Immokalee,” which recently received The Award of Excellence from the Impact Docs Awards. It is co-organized by the UNC CES Working Group on Refugees, Europe, and Service Learning (WRESL) and Cameren Lofton, Program Assistant for the Partnership between the UNC Center for European Studies and the Exodus Institute. The event is co-sponsored by the Bertlesmann Foundation and the Exodus Institute.

Priscilla Layne is Associate Professor of German and Adjunct Associate Professor of African, African American, and Diaspora Studies at UNC-CH. She is also affiliated with the Global Cinema Studies Program. She has guest lectured at Eberhard Karls Universität in Tübingen and at Universität Bremen. Layne focuses on sci-fi, cinema, and Black culture in Germany and Europe. Her first book, White Rebels in Black: German Appropriation of Black Popular Culture, was published in 2018 by the University of Michigan Press. She is also the co-editor of the volume Rebellion and Revolution: Defiance in German Language, History and Art (2008). She is working on a monograph, Out of this World: Afro-German Afrofuturism. She held a Fellowship at the American Academy in Berlin in fall 2018. She has published articles on German film, literature, translation and music in German Studies Review, the Women in German Yearbook and Colloquia Germanica.

Cameren Lofton is currently a Senior from Georgia double majoring in Political Science and Contemporary European Studies. On campus, she is involved in WRESL (Working Group for Refugees, Europe, and Service-Learning), The Bridge online magazine, and the Black Arts Theatre Company. She has also recently started a position as Program Assistant for a partnership between the Center for European Studies and The Exodus Institute, a non-profit in DC with a focus on addressing the crisis of forced migration. After graduation, Cameren plans to take 2 gap years to work before returning to graduate school to earn her Ph.D. in Political Science and eventually become a professor.

Emily Rodriguez joined the Bertelsmann Foundation in July 2018. As director of communications, she shares the findings of BFNA’s projects with the public and connects the Foundation’s experts with journalists and policymakers. Emily came to Bertelsmann after three years with the National Democratic Institute for International Affairs (NDI), where she was senior government relations and communications manager, and press lead on election missions across the globe. Prior, based out of Philadelphia, she worked in domestic politics, strategic communications, and organized labor for almost a decade. Fluent in Spanish, French, and Italian (and working on German and Turkish), the Pennsylvania native’s love for language and culture began in Venezuela. She holds a master’s degree in international development from Sciences Po Paris and a bachelor’s degree from American University’s School of International Service. Emily is a political partner with the Truman National Security Project.