Atlantic history, the history of the great interactions that took place between Europe, Africa and the Americas, has emerged since the 1980s as a dynamic field of study that has generated its own programs, textbooks, essay collections, book prizes and online list-serve. The German presence in the Atlantic world remains largely hidden because of the absence of a German nation state before 1871. Settlers, merchants, mining engineers, missionaries and scientific travelers from the German lands did not fly under a German flag. We have to look for them in the empires established by others, whether Spanish, Dutch, British or French. This lecture, drawn from a larger project on “Germany in the World, 1500-2000”, tries to recover this invisible German presence and shows that Germans played a greater role than we think, often as major brokers or intermediaries.

David Blackbourn is Cornelius Vanderbilt Distinguished Chair and Professor of History at Vanderbilt University. A Fellow of the American Academy of Arts and Sciences and the British Academy, he is the author of Class, Religion and Local Politics in Wilhelmine Germany (1980), The Peculiarities of German History [with Geoff Eley] (1984), Populists and Patricians (1987), Marpingen (1993), The Long Nineteenth Century: A History of Germany, 1780-1918 (1997), The Conquest of Nature (2006), and Landschaften der deutschen Geschichte (2016).

In cooperation with the UNC-Chapel Hill Center for European Studies. This event is part of the North Carolina German Studies Workshop and Seminar Series. Access the PDF of the event flyer. 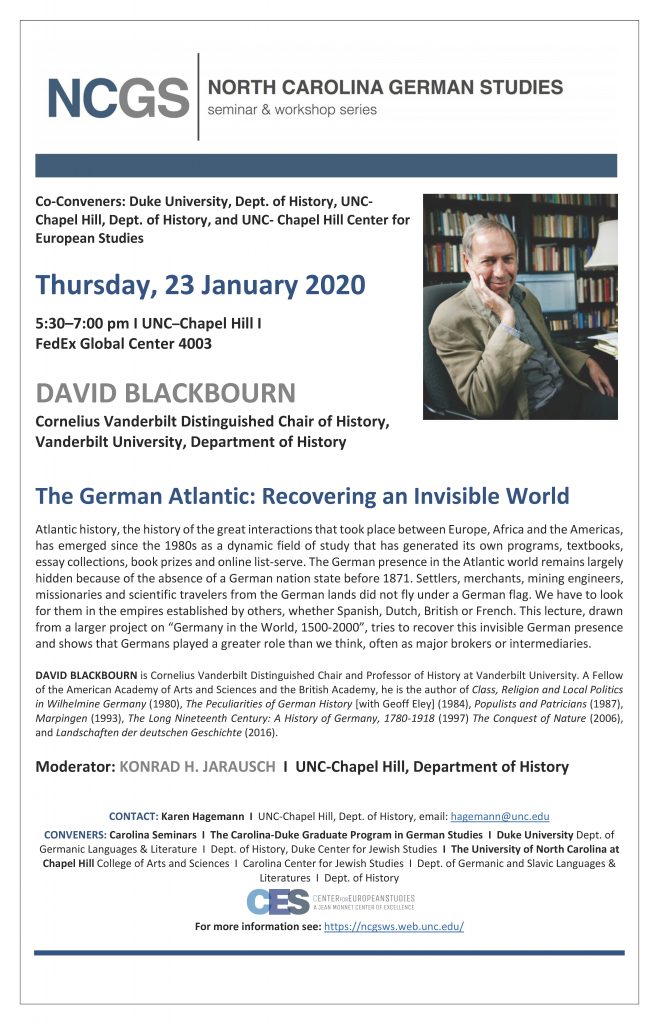