The political divides that are transforming the EU | Panel

Social and political transformations are spreading across our globalized world, and especially in the EU. The economic model that led to growth, prosperity and stability in post-WWII Europe is no longer viable, and rising inequality is stoking social tensions. Long-held balances of power between center-left and center-right parties have been blown apart by rising populist parties. In 2019, it is no longer clear that the EU will continue to expand and prosper and in a few short weeks one of its largest members may be on its way to a Brexit. This panel brings together a stellar group of experts to explore some of the most pressing issues dividing the EU today including the rise of populism, political party breakdowns, and social and geographic divides that are rupturing nations from within.

Jennifer Fitzgerald is Associate Professor of Political Science at the University of Colorado Boulder. A specialist in comparative political behavior, much of Fitzgerald’s work examines the ways in which social context shapes political attitudes and vote choice in advanced democratic societies. Her new book, entitled Close to Home: Local Ties and Voting Radical Right in Europe, is forthcoming with Cambridge University Press in the Cambridge Series in Public Opinion and Political Psychology. The book develops and tests a localist model of radical right support that roots individuals within their communities. The research is based in part on field work conducted as a Fulbright Scholar to France. Fitzgerald began a new collaboration in 2016 with researchers at Örebro University in Sweden to understand the political behavior of young democratic citizens. Her publications include the book Partisan Families: The Social Logic of Bounded Partisanship in Germany and Britain (with Alan Zuckerman and Josip Dasovic, Cambridge University Press) and articles in journals such as The Journal of Politics, Comparative Political Studies, World Politics, Political Behavior, Electoral Studies, and International Migration Review.

Marc Helbling is full professor in political sociology at the Department of Political Science at the University of Bamberg and a Research Fellow at the WZB Berlin Social Science Center where he has previously been head of the Emmy-Noether research group ‘Immigration Policies in Comparison’ (IMPIC). He was a visiting lecturer at the Woodrow Wilson School at Princeton University and a visiting scholar at the Centres for European Studies at Harvard University and New York University. He spent shorter research stays at the European University Institute in Florence, at Oxford University, the University of Sydney and at McGill University. He was an elected member of The Young Academy at the Berlin-Brandenburg Academy of Sciences and Humanities and the National Academy of Sciences Leopoldina. He works on immigration and citizenship policies, nationalism, national identities, xenophobia/islamophobia, and right-wing populism. His research was awarded the Young Scholar Research Award from the Mayor of Berlin, the Best Article Award (Honorable Mention) by APSA’s Section on Migration and Citizenship and the Best Paper Award by the Immigration Research Network of the Council for European Studies. He has also received a Fernand Braudel Fellowship at EUI and an ARC Distinguished Visiting Fellowship at CUNY. His work has appeared in political science journals (e.g., British Journal of Political Science, Comparative Political Studies, European Journal of Political Research), sociology journals (e.g., European Sociological Review, Social Forces) and migration journals (e.g., International Migration Review, Journal of Ethnic and Migration Studies). He has edited a volume on “Islamophobia in the West” (Routledge) and co-authored a book on “Political Conflict in Western Europe” (Cambridge UP).

Rahsaan Maxwell is an Associate Professor in the Department of Political Science at the University of North Carolina, Chapel Hill. The central question for his research is how national boundaries operate. Within that theme, he has pursued numerous topics including immigrant integration, political representation, identity and political behavior, primarily in Western Europe. His recent work focuses on urban-rural divides, cultural diversity, globalization and national culture.

This lecture is co-funded by the Erasmus+ Programme of the European Union. It is organized by Rahsaan Maxwell, a Jean Monnet Center of Excellence key faculty member.

This podcast features an interview with Jennifer Fitzgerald (University of Colorado Boulder) and Mark Helbling (University of Bamberg and WZB Berlin Social Science Center). They discuss the meaning of terms like populism and radical, and dive into their research on what is making people vote for populist (and leftist) parties in Europe. 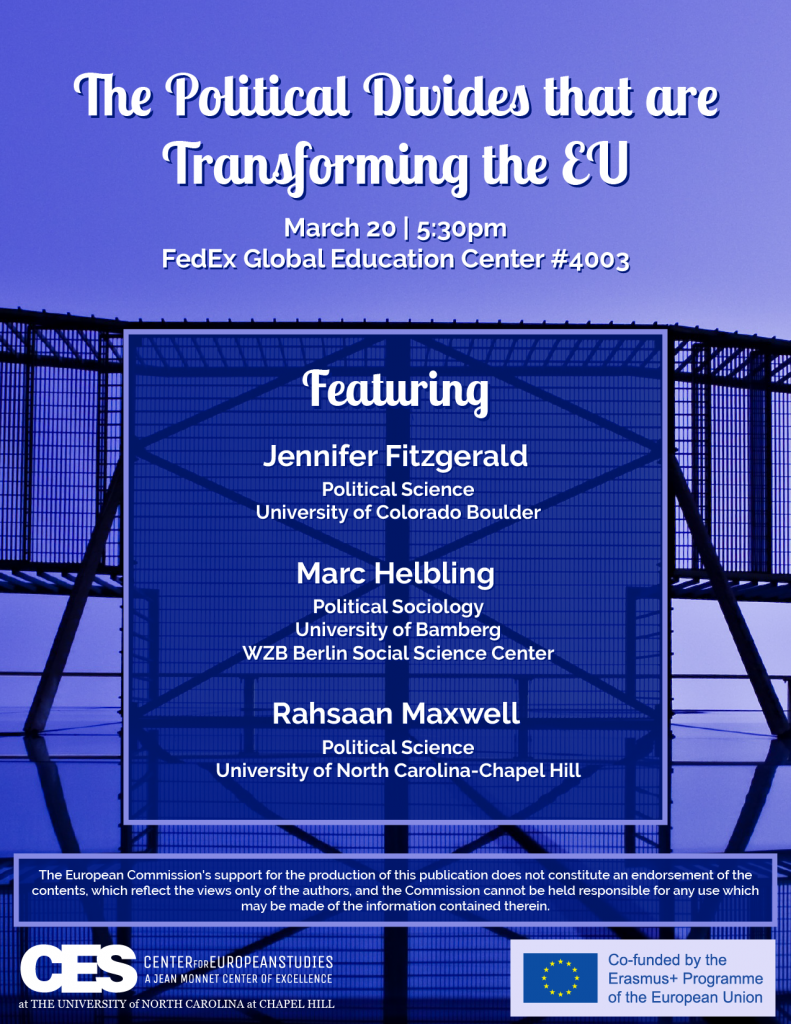