Join student-led think tank European Horizons for a talk from Rebecca Neff, Deputy Director in the Office of Western Europe, Bureau of European and Eurasian Affairs at the US Department of State. 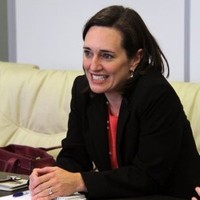 Rebecca is the Deputy Director in the Office of Western Europe, Bureau of European and Eurasian Affairs. In this position, she has overall responsibility for advancing U.S. policy priorities with France, Italy, Spain, Portugal, Malta and the Vatican. From February to July 2019, she served as Acting Director, supervising a team of 20 and providing U.S. policy guidance to the UK, Germany, Ireland, Belgium, the Netherlands, and Luxembourg in addition to her normal portfolio. Prior to this position, she served as Economic Counselor at the U.S. Embassy in Paris, France from 2015-2018 and served at the U.S. Embassy in Moscow, Russia as the Deputy Economic Counselor from 2011-2014. In her assignments in Paris and Moscow, she worked to build strong bilateral economic and commercial relationships, with a focus on entrepreneurship and innovation to foster mutually beneficial economic growth. Rebecca’s other overseas assignments include Ankara, Turkey; London, United Kingdom; and Kyiv, Ukraine. At the State Department, Rebecca served as a Special Advisor to Ambassador Richard Morningstar, Special Envoy for Eurasian Energy and as Director of Planning in the Office of the Coordinator for Stabilization and Reconstruction. Prior to the Foreign Service, Rebecca worked as a Legislative Assistant for Congresswoman Lynn Rivers. She holds a MA in International Relations from the George Washington University, a MS in National Security Studies form the National War College, and a BA in Political Science and French from the University of Michigan. Rebecca speaks French, Russian and Turkish. She is married and has two children.