The two steps of the “Europeanization” of EU elections: A comparative analysis of Germany, Italy, and Spain 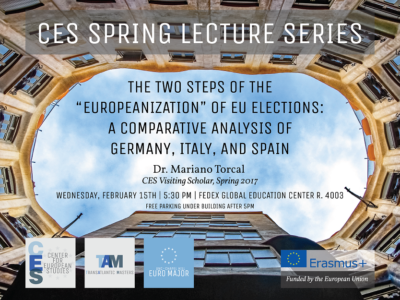 Conventional wisdom and much of the specialized literature state that national politics drive the voting decision-making process in the European Parliament (EP) elections, leaving European matters aside. This Spring Lecture by CES Visiting Scholar Mariano Torcal will argue that the EU dimension becomes significant in the vote choice by two distinctive steps: first, when the party supply incorporates anti-EU political formations (producing some party differential on the EU dimension); and second, when citizens believes that their national cabinets and representatives have a real power to influence the EU status quo.

Mariano Torcal received a PhD from the Universidad Autónoma de Madrid (1995) and a PhD from the Ohio State University (2001). He has served as a Full Professor of Political Science at the Universitat Pompeu Fabra since 2006. Professor Torcal was Chair of the Department and PhD Program coordinator for the Political and Social Sciences Department at the Universitat Pompeu Fabra from 2004-2007. He has served as the Spanish National Coordinator of the European Social Survey since 2001. Prof. Torcal has authored and contributed in several books in the field, and published many articles in national and international specialized journals such as Comparative Political Studies and the British Journal of Political Science. In 1997, he was runner-up for the “Gregory M. Luebbert Prize” for the best article in comparative politics, awarded by the American Political Science Association (APSA). He has also been granted prizes for the best article published in 2003 and the best book published in 2006 by the Spanish Political Science Association. In 2012 he was awarded the “Edgardo Catterberg Award” for the best conference paper at the fifth WAPOR (World Association for Public Opinion Research) Latin American Congress in Bogotá, Colombia, for the paper: “A Dark side of Political Deliberation? The Media and Political Discussion Effects on Political Interest.”