This virtual event is part of 2021 Campus Weeks.

Climate Refugees highlights the human plight of climate change with a focus on the intersection of overpopulation and lack of resources.

Climate Refugees is a 2010 film directed by Michael P. Nash, winner of the Social Change Global Institute Filmmaker of the Year Award. Climate Refugees was screened at the U.S. Senate and House, The Pentagon, The Vatican, and the United Nations COP15 climate summit in December 2009 in Copenhagen. Learn more about the film here .

Nora Löhle is the Program Director for Energy and Environment at the Heinrich Böll Foundation North America, which fosters transatlantic dialogue in support of a low carbon economy agenda, with a particular focus on renewable energies. She is particularly interested in ecological and just transition processes and the role that digitalization and new technologies can play as a catalyst for ecological transformation.

Having worked at the Foundation’s headquarters in Berlin, its regional office in Baden-Württemberg, and the EU office in Brussels, Nora has profound experience in green political work. Prior to joining the Foundation’s North America office, Nora spent three years in the German parliament. As an advisor for a Green party MP, she worked on economy, energy and digital policies. Before, she worked for a consultancy in Berlin, advising ministries and companies on energy issues.

Nora holds an M.A. in Political Science, Public Law and Criminal Law from Eberhard Karls University Tübingen. She also studied at the Universities of Konstanz, Antwerp and Mannheim. 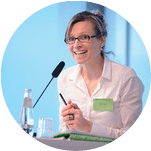