Careers in Diplomacy: A Conversation with Amb. Kathy Stephens

This virtual event is organized by the Carolina Asia Center.

Kathy Stephens had a distinguished career with the Department of State from 1978 to 2015, notably in her posting as US Ambassador to the Republic of Korea from 2008 to 2011 — the first woman and the first Korean-speaker in that post. In addition, she served in China, former Yugoslavia, Portugal, Northern Ireland, and India, and held numerous high-ranking policy positions in Washington, DC, including Under Secretary of State for Public Diplomacy and Public Affairs, Principal Deputy Assistant Secretary of State for East Asian and Pacific Affairs, Deputy Assistant Secretary of State for European and Eurasian Affairs, and National Security Council Director for European Affairs at the Clinton White House.

Students interested in diplomatic careers or other overseas careers with the US government are invited to join us for this virtual conversation, where they can ask Amb. Stephens about her experience and hear her thoughts and advice about careers in these changing times.

Register to join this conversation at https://go.unc.edu/diplomacycareers.

The Carolina Asia Center appreciates the generous support of the Office of the Vice-Provost for Global Affairs for this event. This event is co-sponsored with the Center for European Studies, the African Studies Center, and the Center for Middle East and Islamic Studies. 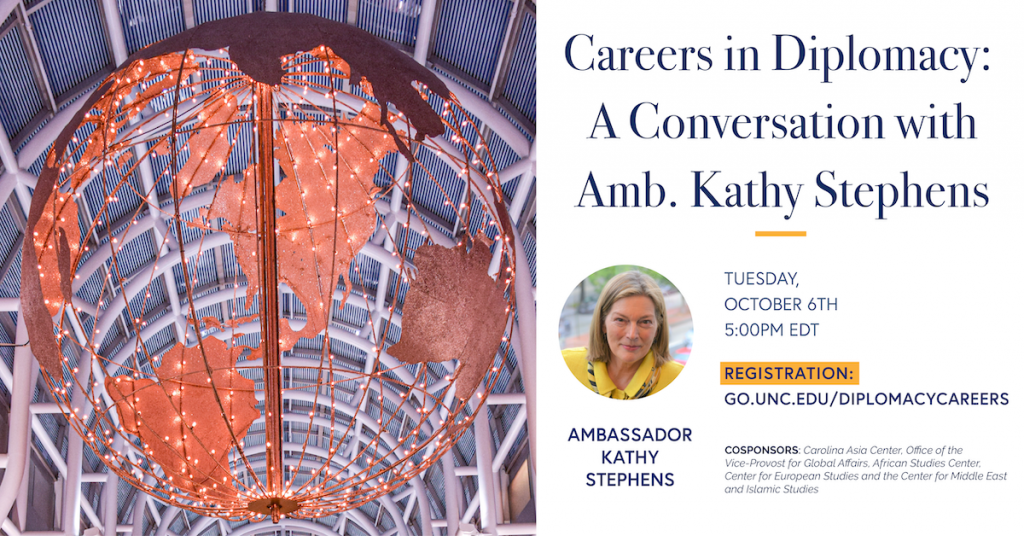