We heard from Professor Christiane Lemke of the University of Hannover in Germany and from one of our WRESL members, Cameren Lofton, about a refugee theater project they worked on this summer. Please read more about Cameren’s summer experience below.

This text was written by Cameren Lofton, a UNC Senior who has been a part of WRESL for several years. Over the summer, I spent six weeks in Hannover, Germany doing independent research on refugee and integration politics. My research primarily focused on a play that was being funded by the city of Hannover as an integration project. The play, Die Insel (The Island), was largely comprised of refugees from the Middle East and migrants from Eastern Europe. It opens with a plane crash on a remote island. With no way of knowing if/when help is on the way, the people on the island must form their own society and discuss the concepts of peace, freedom, and democracy. This play differed from most integration projects, which usually take place in the classroom. Instead, the participants were encouraged to embrace their individuality and took active roles in the conception and production of the play; they wrote the script for the play together and helped with setup. All of them reported that their German skills and knowledge of the political concepts of democracy and civilization improved from their experience with Die Insel. In addition, three of the people in the play were native German citizens, which is important for a two-sided integration process. Structuring an integration project in this nontraditional way gives refugees and migrants more agency in the process of learning a new language and culture. 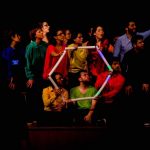 My trip in Germany ended with a conference on other creative integration projects in Hannover.  At this conference, I also had the opportunity to present on the history of Black theatre in the US and its connection with politics. My presentation emphasized the role that the arts can play in politics and challenged the notion that the arts belong in the private sphere and have no place in the political sphere. During the conference, I learned more about integration in Hannover from both the logistic and community perspective. The conference covered integration projects that used soccer, painting, film, and other creative and artistic methods as alternatives to the classroom-style. All of them found great success with their methods. Furthermore, they found that the refugees and migrants participating were more engaged and at times did not realize that they were learning. These projects tend to emphasize the agency of the refugee or migrant while also encouraging a two-sided learning process in which the migrants/refugees and people from the native country are getting to know each other instead of the refugee or migrant having to do all of the learning with no effort from people native to the country. For governments that are looking to approach the issue of integration in a progressive way, integration projects utilizing creative methods could be an efficient alternative to the traditional language and culture classes.